skip to main | skip to sidebar

after the advice, here's what im working with. every thing is still up in the air though, esp. regarding the action of the debris. it needs to look more like an arm but still have the movement. 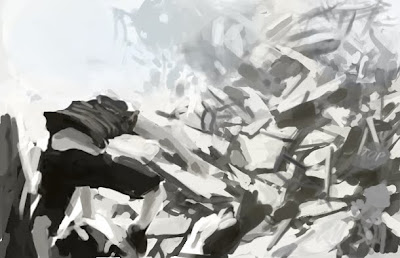 Okay guys, I really want some advice as to which to do. I included the first image just to explain that the debris is actually the golem's arm, it's actually a sidewalk that came to life yada yada. anyways, im pretty set on doing it in a horizontal format, despite action scenes usually being vertical. Some here are more effective than others, but i can't really decide which to do. if you guys have some advice on any particular one to make it more successful, please tell me!

note- im not sure if im going to do it traditionally or digitally. ill decide that later.